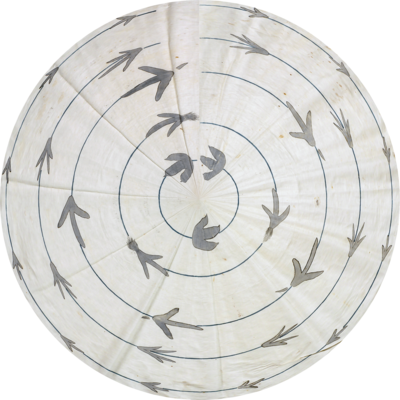 The digitization Dickinson’s manuscripts, begun more than two decades ago and now in its final stages, has largely fulfilled the call for wide-scale access to the contents of her private archive, ensured the continued life of her work, albeit in a different medium, and disclosed the singular textual conditions of her fascicles, unbound poems, drafts, fragments, and correspondences. The near-completion of this foundational work frees us to shift our focus from conservation to curation. Gathering 300+ manuscripts representing 237 poems marked by the presence of birds and 300+ sound and sonogram files of associated calls and songs, Dickinson’s Birds combines elements of the documentary archive, the scholarly edition, and the environmental installation to invite new questions at the intersection of poetics, ecology and ethics.

Of the more than 400 species of birds currently known to nest in the fertile Connecticut River Valley or pass through it on their long migrations, Emily Dickinson named a relatively small number of them, many of which she may have heard from her window or observed in her garden—robins, bobolinks, sparrows, jays, crows, eagles, cardinals, orioles, larks, phoebes, black- and blue-birds, linnets, hummingbirds, owls, plovers, eider ducks, swans, whippoorwills, partridges, cuckoos, doves, and wrens—and a few of which must have instead alighted from the pages of her books—lapwings, nightingales, peacocks. Yet birdsong is arguably the most constant evanescent natural sound she recorded through writing in an age before the technologies of recording had been invented. For Dickinson the birds’ varied departures in late summer and fall for their wintering ranges and their many returns to Amherst throughout the spring and summer affirmed the cyclical and eternal nature of the life-forms of our planet; their brief lives and their often witness-less deaths gave her an indelible image and metaphor of our equally contingent, vulnerable, and common existence in time and weather.

Birds’ sound-making is also place-making. Birdsong orients us, along with the other beings of the earth, to our ecological emplacement in nature, locale, and time. In Dickinson’s nineteenth century, birdsong was almost certainly fuller and less masked than it is for inhabitants of the twenty-first century. Yet Dickinson also lived in the post-Industrial period when new technologies were changing the sound of the world forever. Even the small site of Amherst, Massachusetts reverberated with change. Between 1830 and 1870, the town’s population rose by 53% and the sounds that entered Dickinson’s windows suddenly included not only those of the old earth but also the din of 3,000–4,000 new human inhabitants and their new occupations (http://www.digitalamherst.org/exhibits). In her lifetime, Dickinson saw—and heard—the quiet farms that had prevailed in the landscape outnumbered by clamorous textile- and paper-mills, brick-yards and tool factories. In 1853 perhaps the greatest disturbance of all invaded Amherst: the passenger train originating in Belchertown cut through the town, its jarring hiss and the screech of its brakes a strange stimulus for birdsong: “A train went through a burial gate, / A bird broke forth and sang” (Fr 397).

Following Dickinson’s birds prompts questions at the intersection of poetics, ecology, and ethics: What birds appear most commonly in Dickinson’s writings and why are so many of her references to unnamed birds? In what years or periods of her writing are allusions to birds most numerous, and in what periods do their numbers diminish? What conditions, internal and external, might account for the waxing and waning of the birds across her work? Since birdsong travels across human-made boundaries, how might it have unsettled or enlarged Dickinson’s sense of geographical context or her understanding of writing’s horizon? Do her bird-writings manifest an awareness of the life histories of the birds she heard and of the larger ecological changes occurring around her? While Dickinson could not have foreseen the prospect of Rachel Carson’s “silent spring” (1962), was an early intuition of ecological crisis audible to her in the second half of the nineteenth century? What might her—and our—ethical relations be to beings whose “otherness” is palpable, but who, like us, are subject to the vicissitudes of living and perishing?

By seeking ways to help readers and dwellers of the twenty-first century reimagine one narrow bandwidth of Dickinson’s lost nineteenth-century sound-world—the calls and songs of the birds of Amherst—Dickinson’s Birds both submerses us ever more deeply within Dickinson’s world and summons us to go outside and become listeners in our own. By tapping into the oldest and innermost part of our brain, sound imparts immediate data telling us where we are and whether it is safe, along with relational data that tells us how far we are from other, familiar things. When sounds are missing, that, too, tells us something. Does the birdsong that welcomes us into the sonic fullness of Dickinson’s world make us preternaturally aware of the silences and roaring din that replaces them in our own? What sounds in her sky-world are no longer present in ours, and what twenty-firstt-century sounds threaten to drown out the sounds of the birds she would have heard? And how does our anxious listening for the birds we fear will someday, perhaps even in our lifetimes, sing no more affect our present sense of emplacement on our fragile planet? Following the searching work of Andrew Whitehouse (2015) in his anthropological investigation of the significance of bird sounds to contemporary people’s sense of place and time as well as of the ways in which the diminishment of bird sounds triggers anxieties innate in the Anthropocene’s vision of nature’s finitude, Dickinson’s Birds offers a space for reflection on a means of sounding out contemporary themes of loss and mourning for a planet now suffering profoundly from the effects of climate change, loss of biodiversity, and environmental degradation. At the same time, Dickinson’s Birds also attends to those soundings, however faint, that propose new pathways for moving forward in the altered world we have created and of mapping the ways in which our sharp expectancy of the Sixth Mass Extinction may lead to greater attunement to and ethical interaction with the beings with whom we share an uncertain future.

Through users’ interactions with this archive, moreover, new archives of poems and birds—summer and winter archives, morning and evening archives—will come into being, even as the archive itself will be remade, transformed from a repository of beautiful but static literary documents and ornithological specimens into a living, mutable map-biome. Indeed, formed initially as an archive of poems and birdsongs, Dickinson’s Birds ultimately seeks to un-archive words and sounds by mapping the essentially durational, contingent and vulnerable nature of sounding, singing, writing, listening, and falling silent in the complex and fragile ecological meshwork that is our common and our only home.

Five wishes, sheltering many other less articulate ones, focus and flow through Dickinson's Birds: